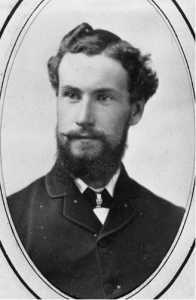 John Campbell (1857-1942) embarked on a career as an architect, serving his apprenticeship under John Gordon between 1872 and 1876 and working for him as an assistant draughtsman for a further three years. Gordon generally designed in an eclectic Greek Revival style, which was fashionable in Scotland. Campbell received a sound training but the buildings he designed in New Zealand reveal little of Gordon’s influence.

Campbell arrived in Dunedin, New Zealand, in 1882 where he worked briefly for the firm of Mason and Wales. On 7 February the following year he was appointed to a temporary position in the Public Works Department in Dunedin. On 30 November 1888 Campbell was transferred to Wellington, where on 1 April 1889 he became draughtsman for the Public Buildings Department. That department merged with the Public Works Department in 1890, and Campbell’s title became ‘architect’ in 1899. He remained in charge of the architectural design of government buildings in New Zealand until his retirement in 1922, holding the newly created title of government architect from 1909.

Campbell’s first known work, an un-built design from the mid 1880s for the Dunedin railway station, reveals an interest in Baroque architectural elements, which was to become his hallmark. However, the earliest buildings constructed to his design, such as the Porirua Lunatic Asylum (1891–94, now demolished) and the Dunedin police station (1895-98, modelled on New Scotland Yard, London), are predominantly Queen Anne in style.

Despite the completion of the Dunedin Law Courts in a Gothic style with a Scottish baronial inflection in 1902, Campbell successfully established Edwardian Baroque as the official architectural style for government buildings in New Zealand in the early twentieth century. In buildings as diverse in function as the Magistrate’s Court, Wellington (1901-3), the Napier Government Buildings (1902-7, destroyed in the 1931 earthquake) and the Public Trust Office, Wellington (1905-9), Campbell used a limited range of Baroque design elements. His standardisation of the architecture of government buildings is nowhere more evident than in the design of post offices. During a post office building boom between about 1900 and 1914 he was largely responsible for two major post office buildings of similar design (the Auckland and Wellington chief post offices), and many smaller post office buildings . The style established for government buildings by Campbell was not adopted by his successors. However, he played an important role in establishing the office of government architect as a respected architectural practice in New Zealand. He was a quiet and unassuming man; his buildings are by contrast so ostentatious that they command attention. Although many have now been demolished, probably more examples of his work are known to New Zealanders, although anonymously, than buildings designed by any other architect.